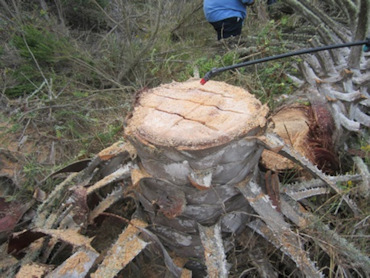 Field mapping data were collected using tablet computers with integrated mapping-grade Global Positioning System (GPS) to ensure location accuracy and Garmin GPSMap® 60CSx units. All units and other devices used for mapping, such as tablet computers, were loaded with necessary databases and maps prior to deployment in the field. Non-native and invasive species polygons were delineated in the field with a minimum mapping unit of approximately 0.10 acre. Point data were collected for invasive species occurrences that were also less than 0.10 acre. As requested by the Navy, observations were collected in the field as points were buffered to create 0.099-acre polygons and then added to the polygon data layer.

Invasive species mapping occurred simultaneously with treatments. Herbicide application and mechanical methods were used to combat the spread of annual and perennial invasive species as identified by the client. Other invasive species were opportunistically treated when encountered in treatment areas. The mapping and invasive plant removal were completed according to the client’s needs. Pesticide data were submitted to the Navy Online Pesticide Reporting System. While maintaining the highest standards of quality for equipment maintenance, herbicide application, sub-contractor oversight, and deliverables, KMEA staff implemented all tasks with safety as their top priority.

Following the appropriate modifications as requested by the client to meet their needs, all field mapping, pesticide treatments, invasive plant removal, and production of deliverables were conducted on budget and completed on schedule.